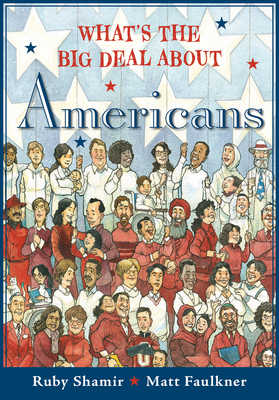 From Native American traditions to immigrant inventions, from diversity to democracy, from ice cream cones to apple pie, this fun and fact-filled book--now in chapter book format!--celebrates the melting pot and mosaic that is America.

Did you know that the inventor of American cheese actually came from Canada? Or that founding father Benjamin Franklin was inspired to create a democratic society by a confederacy of Native American tribes who came together to stop their constant warring? How about that both "God Bless America" and "White Christmas" were written by Irving Berlin, a Russian Jew who fled to the U.S. because of persecution back home?

People have come to America from many countries, in many ways, for many reasons. Americans have many different beliefs, different languages, and different traditions. But even with all of these differences, America comes together with the understanding that our country and government is "of the people, by the people, and for the people." And there's nothing more American than that.

Matt Faulkner (www.mattfaulkner.com) is an award-winning children's book author and illustrator who graduated from the Rhode Island School of Design. With 39 illustrated books to his credit, Matt enjoys working on projects both historical and fantastical in nature (and he concentrates very hard not to get them confused). His most recent graphic novel GAIJIN: AMERICAN PRISONER OF WAR (Disney/Hyperion) won the Asian/PacificALA award for 2015. He is married to author and children's librarian, Kris Remenar. They worked together to create the delightful picture book GROUNDHOG'S DILEMMA (Charlesbridge). They live with their two kids and two cats in the lower right hand corner of Michigan. Follow him on Twitter @MattFaulkner1.