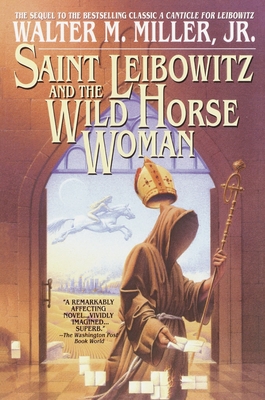 Forty years after the classic A Canticle for Leibowitz, Walter Miller returns to a world struggling to transcend a terrifying legacy of darkness, as one man undertakes an odyssey of adventure and discovery that promises to alter the destiny of humankind . . . .

Isolated in Leibowitz Abbey, Brother Blacktooth St. George suffers a crisis of faith, torn between his vows and his Nomad upbringing, between the Holy Virgin and visions of the Wild Horse Woman of his people. At the brink of disgrace and expulsion from his order, the young monk is championed by a powerful cardinal who has plans for him. Blacktooth sets out on a journey across a landscape still scarred by the long-ago Flame Deluge, a land divided by nature, politics, and war.  He will find horrors and wonders, sins of the flesh . . . and love.  As he encounters and reencounters a beautiful but forbidden mutant named Ædrea, he begins to wonder: is a she-devil, the Holy Mother, or the Wild Horse Woman herself?

Walter M. Miller, Jr. grew up in the American South and enlisted in the Army Air Corps a month after Pearl Harbor.  He spent most of World War II as a radio operator and tail gunner, participating in more than fifty-five combat sorties, among them the controversial destruction of the Benedictine abbey at Monte Cassino, the oldest monastery in the Western world.  Fifteen years later he wrote A Canticle for Leibowitz.  The sequel, Saint Leibowitz and the Wild Horse Woman, followed after nearly forty years.

Terry Bisson is the award-winning author of numerous short stories as well as the novels Talking Man and Voyage to the Red Planet.

"I can't remember the last time I so avidly looked forward to reading a new novel, and with such gratifying results."
--Science Fiction Chronicle