The Accidental Ecosystem: People and Wildlife in American Cities (Hardcover) 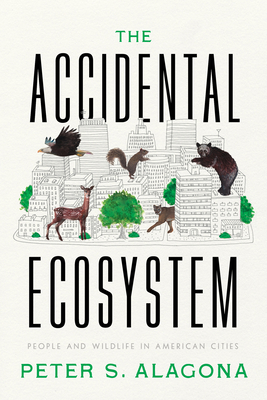 With wildlife thriving in cities, we have the opportunity to create vibrant urban ecosystems that serve both people and animals.

The Accidental Ecosystem tells the story of how cities across the United States went from having little wildlife to filling, dramatically and unexpectedly, with wild creatures. Today, many of these cities have more large and charismatic wild animals living in them than at any time in at least the past 150 years. Why have so many cities—the most artificial and human-dominated of all Earth’s ecosystems—grown rich with wildlife, even as wildlife has declined in most of the rest of the world? And what does this paradox mean for people, wildlife, and nature on our increasingly urban planet?

The Accidental Ecosystem is the first book to explain this phenomenon from a deep historical perspective, and its focus includes a broad range of species and cities. Cities covered include New York City, Los Angeles, San Francisco, Pittsburgh, Austin, Miami, Chicago, Seattle, San Diego, Atlanta, Philadelphia, and Baltimore. Digging into the natural history of cities and unpacking our conception of what it means to be wild, this book provides fascinating context for why animals are thriving more in cities than outside of them. Author Peter S. Alagona argues that the proliferation of animals in cities is largely the unintended result of human decisions that were made for reasons having little to do with the wild creatures themselves. Considering what it means to live in diverse, multispecies communities and exploring how human and non-human members of communities might thrive together, Alagona goes beyond the tension between those who embrace the surge in urban wildlife and those who think of animals as invasive or as public safety hazards. The Accidental Ecosystem calls on readers to reimagine interspecies coexistence in shared habitats, as well as policies that are based on just, humane, and sustainable approaches.

Peter S. Alagona is an environmental historian, conservation scientist, nature-culture geographer, and Professor of Environmental Studies at the University of California, Santa Barbara.

"Historian Alagona skillfully demonstrates how America’s cities have become ‘weird wildlife refuges,’ in this hopeful account. He sets the stage by describing animal life in cities in times past: many metropolises were founded on sites of biological richness, but as cities grew, wildlife populations declined. But in the past few decades, that’s changed, and cities have become places with rich ecosystems that have fostered an ‘explosion of wildlife’. . . . Alagona argues that people must learn to live with wildlife."

“Alagona shows that wildlife in urban areas can be a blessing, a curse, or both. Ultimately, he sees a golden opportunity to redefine our relationship with wildlife and perhaps with each other as we share urban ecosystems.”
— Natural Resource Management Today