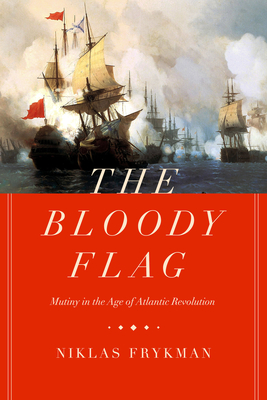 Mutiny tore like wildfire through the wooden warships of the age of revolution. While commoners across Europe laid siege to the nobility and enslaved workers put the torch to plantation islands, out on the oceans, naval seamen by the tens of thousands turned their guns on the quarterdeck and overthrew the absolute rule of captains. By the early 1800s, anywhere between one-third and one-half of all naval seamen serving in the North Atlantic had participated in at least one mutiny, many of them in several, and some even on ships in different navies. In The Bloody Flag, historian Niklas Frykman explores in vivid prose how a decade of violent conflict onboard gave birth to a distinct form of radical politics that brought together the egalitarian culture of North Atlantic maritime communities with the revolutionary era’s constitutional republicanism. The attempt to build a radical maritime republic failed, but the red flag that flew from the masts of mutinous ships survived to become the most enduring global symbol of class struggle, economic justice, and republican liberty to this day.

Niklas Frykman is Assistant Professor of Atlantic History at the University of Pittsburgh.

"The 1789 mutiny aboard the Bounty remains the most famous maritime uprising of its era, and perhaps of all time. But in The Bloody Flag, Niklas Frykman portrays an era of lower-deck turbulence of far greater magnitude. . . . Most uprisings, according to this slender, informative volume, embodied a radical maritime culture that would not again arise on such a spectacular scale until the 20th century."
— Wall Street Journal

"Frykman breathes life into his subject in this vividly written tale of an oft-underrepresented history. Readers interested in maritime, naval, labor, and Atlantic history will greatly enjoy."
— Library Journal

"As Frykman takes his reader on a whirlwind ride across the Atlantic Ocean during the Era of Revolution, he weaves a compelling narrative that draws on material cultural, ideology and mariner’s biographies. Although numerous studies of the Era of Revolution abound, Frykman’s book employs a novel methodology that connects this age with the Communist Revolution."
— Northern Mariner