Memoirs of a Revolutionist (Dover Books on History) (Paperback) 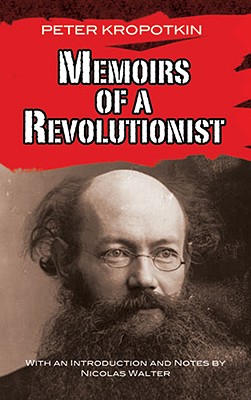 By Peter Kropotkin, Nicolas Walter (Introduction by)
Email or call for price.
Out of Print - Not Available

Born into a wealthy family of landowners, Prince Peter Alexeivich Kropotkin (1842-1921) served in the court of the Tsar and held prestigious diplomatic posts. But the prince renounced his life of privilege to embrace nonviolent anarchism, a revolutionary alternative to Marxism. A leading theoretician of his day, Kropotkin wrote the basic books in the library of anarchism, prepared countless pamphlets and speeches, and worked tirelessly to subvert the class structure and promote a philosophy of collective action.
In this autobiography, Kropotkin recounts his early life in the royal court and his military service in Siberia, along with his imprisonment, escape, and European exile. His portraits of nineteenth-century Russian life rival those of the great novelists, ranging from moving examples of the unbridgeable chasm between nobles and serfs to gripping scenes of midnight plots enacted outside the Kremlin's walls. An eminent geographer and cartographer, Kropotkin also offers fascinating views from his explorations of Siberia. An Introduction and explanatory notes enhance this unabridged edition of a thrilling real-life story of idealism and adventure.

Peter Kropotkin (1842-1921) rejected his aristocratic birthright and the inequalities of Russian society to pursue a philosophy of nonviolent anarchism based on mutual aid.