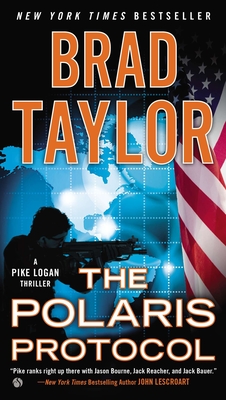 This is book number 5 in the A Pike Logan Thriller series.

Taskforce operators Pike Logan and Jennifer Cahill are used to putting their lives at risk, but in this thrilling New York Times bestseller, one of their own family gets caught up in untold danger...

As an investigative reporter working on the Mexican drug cartels, Jack Cahill has unknowingly gotten caught between two rival groups. His desperate call to his sister is his last before he’s kidnapped.

In their efforts to rescue Jack, Pike and Jennifer uncover a plot much more insidious than illegal drug trafficking—the cartel that put a target on Jack’s back has discovered a GPS hack with the power to effectively debilitate the United States.

With the GPS hack about to be exploited and Jack’s life at stake, Jennifer and Pike must find a way to eliminate the impending threat. The price of failure, for both the Taskforce and the country, is higher than ever.

Praise for The Polaris Protocol

“A great premise, nonstop action, and one of the baddest villains in the genre...make this a winner.”—Publishers Weekly

“Admirers of the late Tom Clancy will enjoy this and other works in the series.”—Kirkus Reviews

“Taylor continues to tell exciting action stories with the authenticity of someone who knows the world of special ops. He also has the chops to create terrific characters whom readers will root for. This series just gets better and better.”—Booklist