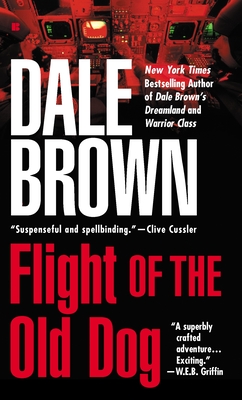 This is book number 1 in the Patrick McLanahan Series series.

Flight of the Old Dog is the runaway bestseller that launched the phenomenal career of Dale Brown. It is the riveting story of America’s military superiority being surpassed as our greatest enemy masters space-to-Earth weapons technology—neutralizing the U.S. arsenal of nuclear missiles.

America’s only hope: The Old Dog Zero One, a battle-scarred bomber fully renovated with modern hardware—and equipped with the deadliest state-of-the-art armaments known to man…

Dale was born in Buffalo, New York on November 2, 1956. He graduated from Penn State University and received an Air Force commission in 1978. He was a navigator-bombardier in the B-52G Stratofortress heavy bomber and the FB-111A supersonic medium bomber, and is the recipient of several military decorations and awards including the Air Force Commendation Medal with oak leaf cluster, the Combat Crew Award, and the Marksmanship ribbon. He flew over 2500 hours in various military tactical and training aircraft from 1978 to 1986 and was also a graduate of the U.S. Army Airborne School.

Dale is a volunteer pilot for AirLifeLine, a non-profit national charitable medical transportation organization who fly needy persons free of charge to receive treatment. He also supports a number of organizations to support and promote law enforcement and reading. He is a member of the Airplane Owners and Pilots Association, The Writers Guild, and a Life Member of the Air Force Association and U.S. Naval Institute. He is a multi-engine and instrument-rated private pilot and can often be found in the skies all across the United States, piloting his Piper Aerostar 602P. On the ground, Dale enjoys tennis, scuba diving, and hockey. He lives in Incline Village, Nevada.

“A page-turner…an adventure story with an eerie sense of reality…a premise that is possibly the most frightening since Fail Safe.” —Richmond Times-Dispatch