Is Fat Bob Dead Yet?: A Novel (Paperback) 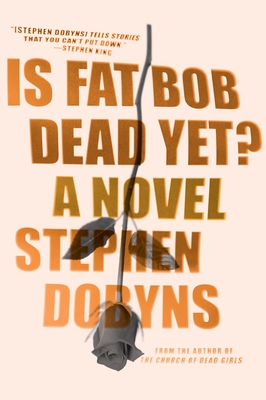 Stephen Dobyns—whom Stephen King has described as "the best of the best"—is back with a comic suspense novel about a small-time con operation, a pair of combative detectives, and the pride, revenge, and deception that guide us all. Richard Russo meets Elmore Leonard.

In the seaport town of New London, Connecticut, newcomer Connor Raposo has just witnessed a gruesome motorcycle accident on Bank Street. At least he thinks it was an accident. A man sliced in half by a reversing dump truck could only be an accident, right?

But these days, Connor can’t be sure of anything—his entire line of work is based on games of artful deception. His days at Bounty, Inc., are spent soliciting funds for improbable, bogus charities; its last venture was Free Beagles from Nicotine Addiction, Inc. The new scam is Prom Queens Anonymous, Inc., dedicated to helping former high school celebs transition to humdrum daily grown-up lives; Connor’s target is Angelina Rossi—Pumpkin Queen of 1985, proud beagle owner, and ex-wife of a man named Fat Bob.

Meanwhile, Manny Streeter and Benny Vikström are the local detectives assigned to the Bank Street motorcycle wreck, and despite their shared interest of proving each other wrong, the two eventually reach the same conclusion: This death by Harley was Murder One, pure and simple. As the detectives begin asking their questions around town, Connor is looking for similar answers that will determine whether he lives or dies. Among them: Who is Fat Bob, and is he actually dead?

Sharply written and entertainingly absurd, Is Fat Bob Dead Yet? is packed with Stephen Dobyns’s trademark characters—whimsical, neurotic, puzzling yet familiar, and impossible to pin down. Dobyns again proves why he is an American master of the suspenseful, all-too-human land of the absurd.

Stephen Dobyns is the author of more than thirty-five novels and poetry collections, including The Burn Palace, The Church of Dead Girls, Cold Dog Soup, and Cemetery Nights. Among his many honors are a Melville Cane Award, Pushcart Prizes, a 1983 National Poetry Series selection for Black Dog, Red Dog: Poems, and three National Endowment for the Arts fellowships. His novels have been translated into twenty languages, and his poetry has appeared in the Best American Poetry anthology. Dobyns, who has taught at the University of Iowa, Boston University, Syracuse University, and Sarah Lawrence College, teaches creative writing in the master of fine arts program at Warren Wilson College.

“Stephen Dobyns pulls off a neat misdirection in this brazenly titled comic crime novel. On its face, “Is Fat Bob Dead Yet?” is a frivolous romp through an underworld of solecism-spouting thieves and doltish enforcers. But…there’s surprising depth here, as Dobyns convenes an ensemble cast whose thwarted ambitions suffuse an antic storyline with an air of poignancy.” —The Washington Post

"This crafty, witty, hilarious novel by award-winning writer Stephen Dobyns…views life as whimsical and capricious, or as one character describes it, “tradiculous,” a mixture of tragedy and the ridiculous." —Providence Journal


"The latest offering from veteran novelist and poet Dobyns (The Burn Palace) delights with quirky characters, absurd situations, language play, and keen insights. Recommended for those who enjoy dark humor and complicated plots in their mysteries." —Library Journal

"Stephen Dobyns is what the baseball scouts call a five-tool player: he writes with ease and insight, he can make you laugh in one paragraph and rock you back on your heels in the next, and he tells stories that you can’t put down. All those talents are in full flower in IS FAT BOB DEAD YET? I loved it, and so will you."
—Stephen King