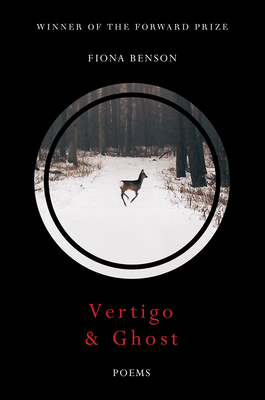 Named a Most Anticipated Book of Spring 2021 by Publishers Weekly

Winner of the 2019 Forward and Roehampton Prizes, Vertigo & Ghost offers a searing reimagining of Greek myths of sexual violence that crackles with rage, energy, and empathy.

Beginning with a poem about the teenage dawning of sexuality, Vertigo & Ghost pitches quickly into a fierce, electrifying, riveting sequence that exposes Zeus as a serial rapist, for whom women are prey and sex is weaponized. As unflinching, devastating poems of vulnerability and anger confront Zeus with aggressions both personal and historical, his house comes crumbling down. In its place, acclaimed poet Fiona Benson reveals a disturbing contemporary world in which violent acts against women continue to be perpetrated on a daily, even hourly, basis.

In the volume’s second half, Benson shifts to an intimate and lyrical document of depression and family life. These moving poems probe the ambivalent terrain of early motherhood—its anxieties and claustrophobias as well as its gifts of tenderness and love—reclaiming the sanctuary of domestic private life and the right to raise children in peace and safety. Together, these two halves form a complex portrait of modern womanhood.

Dynamic in its range and risk, Vertigo & Ghost introduces an important British voice to an American audience, a voice that speaks out with clarity, grace, and bravery against abuse of power.

Fiona Benson won an Eric Gregory Award in 2006 and a Faber New Poets Award in 2009. Both her first collection, Bright Travellers, and Vertigo & Ghost were shortlisted for the T. S. Eliot Prize. She lives in Mid Devon, United Kingdom, with her family.

Vertigo & Ghost explodes into furious life with a series of poems and fragments about the Greek god Zeus.… [These are] jagged, staccato poems that shoot down the pages like lightning bolts.… [A]n addictive, thrilling, sickening experience.

[This] extraordinarily moving collection is a bold confrontation of violence against women. Vertigo & Ghost is one of the darkest, bravest and most unsettling collections I have read in a while.

A tour-de-force.… [Vertigo & Ghost] has generated a lot of (justified) buzz.… [P]oems of lasting power.

Benson here shows us the real, terrifying world in musical, natural scenes which are immediately memorable, whose dark fruit is brewed from sorrow and the condensing pressures of inescapable love.
— Declan Ryan - White Review