Strangers on a Train (Paperback) 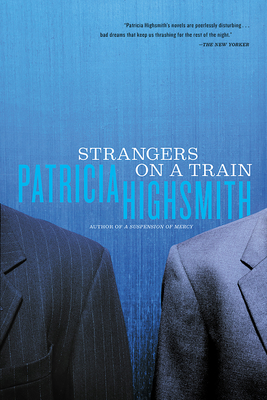 By Patricia Highsmith
Email or call for price.
Out of Print - Not Available

"For eliciting the menace that lurks in familiar surroundings, there's no one like Patricia Highsmith." —Time

The world of Patricia Highsmith has always been filled with ordinary people, all of whom are capable of very ordinary crimes. This theme was present from the beginning, when her debut, Strangers on a Train, galvanized the reading public. Here we encounter Guy Haines and Charles Anthony Bruno, passengers on the same train. But while Guy is a successful architect in the midst of a divorce, Bruno turns out to be a sadistic psychopath who manipulates Guy into swapping murders with him. "Some people are better off dead," Bruno remarks, "like your wife and my father, for instance." As Bruno carries out his twisted plan, Guy is trapped in Highsmith's perilous world, where, under the right circumstances, anybody is capable of murder.

The inspiration for Alfred Hitchcock's classic 1951 film, Strangers on a Train launched Highsmith on a prolific career of noir fiction, proving her a master at depicting the unsettling forces that tremble beneath the surface of everyday contemporary life.

Patricia Highsmith (1921–1995) was the author of more than twenty novels, including Strangers on a Train, The Price of Salt and The Talented Mr. Ripley, as well as numerous short stories.

An incredible study of psychological torture and how fine the membrane is between normality and the underlying darkness.
— Tana French

Strangers on a Train is a moral-vertigo thriller: Crime and Punishment for a post-atomic age.

Strangers on a Train is filled with paranoia and anxiety, and through its twists and turns, we, like poor Guy Haines, are also drawn into psychopath Bruno's web.

— Sarah Pinborough, author of Behind Her Eyes

A moody and disturbing excavation of guilty paranoia…Strangers on a Train was her debut novel, but [Highsmith's] sense of anxious foreboding was already fully formed.

One is held by an evil kind of suspense…a rarely perceptive study in criminal psychology.
— New York Herald Tribune