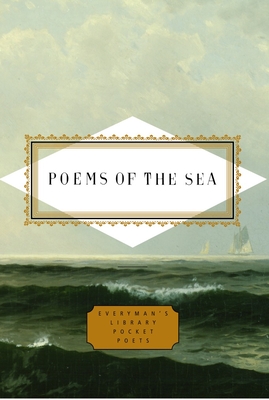 Throughout history, poets have felt the ancient pull of the sea, exploring the full range of mankind’s nautical fears, dreams, and longings. The colorful legends of the sea–pirates and mermaids, phantom ships and the sunken city of Atlantis–have inspired as many imaginations as have the realities of lighthouses and shipwrecks, of icebergs and frothing foam and seaweed.

This marvelous collection includes classics old and new, from Homer and Milton to Plath and Merwin. Here are Tennyson’s seductive sea-fairies next to Poe’s beloved Annabel Lee. Here is Coleridge’s darkly brooding “The Rime of the Ancient Mariner” alongside the grandeur of Shakespeare’s “Full Fathom Five.” And here is Masefield’s “I must go down to the seas again” alongside Cavafy’s “Ithaka” and Stevens’s “The Idea of Order at Key West.” In the wide variety of lyrics collected here–sonnets and sea chanteys, ballads and hymns and prayers–we feel the encompassing power of our planet’s restless waters as metaphor, mystery, and muse.

J. D. McClatchy is the author of five collections of poems: Scenes From Another Life, Stars Principal, The Rest of the Way, Ten Commandments, and Hazmat. He has also written two books of essays: White Paper and Twenty Questions. He has edited many other books, including The Vintage Book of Contemporary World Poetry, Poets on Painters, and Horace: The Odes. In addition, he edits The Voice of the Poet series for Random House AudioBooks, and has written seven opera libretti. He is a Chancellor of the Academy of American Poets and a member of the American Academy of Arts and Letters. He has taught at Princeton, UCLA, and Johns Hopkins, and is now a professor at Yale, where since 1991 he has edited The Yale Review. He lives in Stonington, Connecticut.