Down to the Crossroads: Civil Rights, Black Power, and the Meredith March Against Fear (Hardcover) 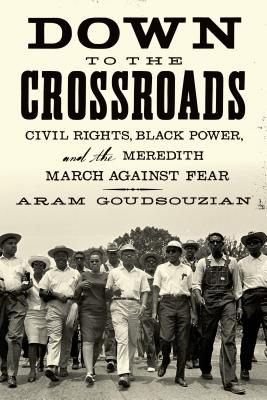 By Aram Goudsouzian
Email or call for price.
Unlikely to be Available

In 1962, James Meredith became a civil rights hero when he enrolled as the first African American student at the University of Mississippi. Four years later, he would make the news again when he reentered Mississippi, on foot. His plan was to walk from Memphis to Jackson, leading a "March Against Fear" that would promote black voter registration and defy the entrenched racism of the region. But on the march's second day, he was shot by a mysterious gunman, a moment captured in a harrowing and now iconic photograph.
What followed was one of the central dramas of the civil rights era. With Meredith in the hospital, the leading figures of the civil rights movement flew to Mississippi to carry on his effort. They quickly found themselves confronting southern law enforcement officials, local activists, and one another. In the span of only three weeks, Martin Luther King, Jr., narrowly escaped a vicious mob attack; protesters were teargassed by state police; Lyndon Johnson refused to intervene; and the charismatic young activist Stokely Carmichael first led the chant that would define a new kind of civil rights movement: Black Power.
Aram Goudsouzian's "Down to the Crossroads" is the story of the last great march of the King era, and the first great showdown of the turbulent years that followed. Depicting rural demonstrators' courage and the impassioned debates among movement leaders, Goudsouzian reveals the legacy of an event that would both integrate African Americans into the political system and inspire even bolder protests against it. Full of drama and contemporary resonances, this book is civil rights history at its best.

Aram Goudsouzian is chair of the history department at the University of Memphis. He earned his B.A. from Colby College and his Ph.D. from Purdue University. He is the author of King of the Court: Bill Russell and the Basketball Revolution, The Hurricane of 1938, and Sidney Poitier: Man, Actor, Icon. He lives in Memphis, Tennessee.

"An estimably well-researched and pitch-perfect work of history . . . Goudsouzian’s well-written book is a model of authoritative and jargon-free scholarship."
—The Washington Post

"Down to the Crossroads provides a nuanced and engaging look at what was one of the last major marches of the civil-rights movement."
—Wall Street Journal“Aram Goudsouzian has written the single best book on a critical period of the civil rights struggle. He helps us to understand fully what really happened to the movement and in America after passage of the historic 1964-65 civil rights laws. With a scholar’s meticulous research, an investigative reporter’s comprehensive interviewing, and a novelist’s lyrical prose, Goudsouzian brings alive an important chapter in American history.”
—Nick Kotz, author of Judgment Days: Lyndon Baines Johnson, Martin Luther King, Jr., and the Laws That Changed America"Down to the Crossroads stands every chance of being career-defining. It is meticulously researched, and it is thoroughly readable. It is also a story that remained relatively under-reported — until now."
—Leonard Gill, Memphis Flyer“In Down to the Crossroads, Aram Goudsouzian re-creates the last great march of the civil rights movement in vibrant and intimate detail. Through compelling prose and exciting storytelling, Goudsouzian introduces contemporary readers to the central characters of a great American drama: a historic political movement in transition, precisely at the end of the era of nonviolent civil disobedience and the beginning of the revolutionary politics of Black Power, militancy, and armed resistance. This book is a must-read for anyone curious about the sixties and about the roots of the political movement that elected Barack Obama president.”
—Henry Louis Gates, Jr., Alphonse Fletcher University Professor and director of the Hutchins Center for African and African American Research, Harvard University“The Meredith March remains one of the most under-studied yet significant events of the civil rights era. In Aram Goudsouzian, the march has found its definitive chronicler. Fresh, powerful, and brimming with new historical insights, Down to the Crossroads is a truly impressive account of a march that forever transformed American race relations.”
—Peniel E. Joseph, professor of history at Tufts University and author of Waiting ’Til the Midnight Hour: A Narrative History of Black Power in America and Stokely: A Life“Down to the Crossroads is a splendid addition to the literature of the southern struggle to overcome the Jim Crow system. It offers a vivid account of the tumultuous events that brought together the key civil rights leaders of the 1960s, and it deepens our understanding of their contrasting answers to Martin Luther King’s enduring question: Where do we go from here?”
—Clayborne Carson, founding director of Stanford University’s Martin Luther King, Jr., Research and Education Institute and author of Martin’s Dream: My Journey and the Legacy of Martin Luther King Jr.