Darkened Enlightenment: The Deterioration of Democracy, Human Rights, and Rational Thought in the Twenty-First Century (Paperback) 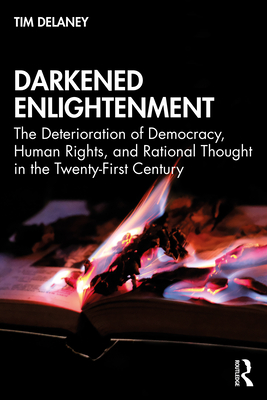 By Tim Delaney
Email or call for price.

The premise of Darkened Enlightenment is to highlight the fact that there currently exist a number of socio-political forces that have the design, or ultimate consequence, of trying to extinguish the light of reason and rationality.

The book presents a critique of modernity and provides a socio-political and cultural analysis of world society in the early twenty-first century. Specifically, this analysis examines the deterioration of democracy, human rights, and rational thought. Key features include a combination of academic analysis that draws on numerous and specific examples of the growing darkness that surrounds us along with a balanced practical, everyday-life approach to the study of the socio-political world we live in through the use of popular culture references and featured boxes.

The general audience will also be intrigued by these same topics that concern academics including: a discussion on the meaning of "fake news"; attacks on the media and a declaration of the news media as the "enemy of the people"; the rise of populism and nationalism around the world; the deterioration of freedom and human rights globally; the growing economic disparity between the rich and the poor; attempts to devalue education; a growing disbelief in science; attacks on the environment; pseudoscience as a by-product of unreasoned and irrational thinking; the political swamp; the power elites and the deep state; and the variations of Big Business that impact our daily lives. This book will make a great contribution to such fields as sociology, philosophy, political science, environmental science, public administration, economics, psychology, and cultural studies.

Tim Delaney is a Professor and Department Chair of Sociology at the State University of New York (SUNY) at Oswego. Among his most recent book publications are Common Sense as a Paradigm of Thought (2019) and Social Deviance (2017).