City on the Edge (Hardcover) 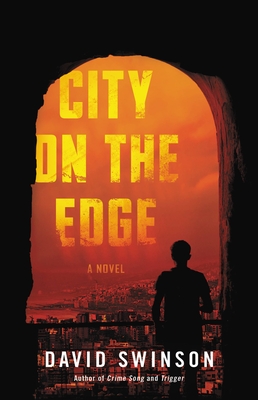 An American teen living abroad discovers the truth about himself and his family in this thrilling novel from "one of the best dialogue hounds in the business" (New York Times Book Review).

In the wake of a baffling tragedy, 13-year-old Graham moves with his family to Beirut, Lebanon, a city on the edge of the sea and cataclysmic violence. Inquisitive and restless by nature, Graham suspects his State Department father is a CIA operative, and that their family’s fragile domesticity is merely a front for American efforts along the nearby Israeli border. Over the course of one year, 1972, Graham’s life will utterly change. Two men are murdered, his parent’s marriage disintegrates, and Graham, along with his two ex-pat friends, run afoul of forces they cannot understand.

The City on the Edge is elegiac, atmospheric, and utterly authentic. It’s the story of innocents caught within the American net of espionage, of the Lebanese transformed by such interference, of the children who ran dangerously beside the churning wheel of history. One part Stephen King’s “The Body” and another John le Carre’s A Perfect Spy, it’s a transformative crime story told with heart and genuine experience.

David Swinson grew up in Washington, DC, Beirut, Mexico City and Stockholm, the son of a foreign service officer. He is a retired police detective from the Metropolitan Police Department in Washington, DC, having been assigned to Major Crimes. Swinson is the author of The Second Girl, Crime Song and Trigger. He lives with his wife and daughter in Northern Virginia.

“This stand-alone follow-up to Swinson's Frank Marr mysteries—most recently Trigger (2019)—unfolds with cool understatement and entertaining period details (prepare for an onslaught of Jethro Tull) and builds to a satisfying climax.”
—Kirkus

“Swinson offers the reader a deeply felt coming-of-age novel set against a background of powerful authenticity. This is not to be missed.”
—Publishers Weekly

PRAISE FOR DAVID SWINSON AND FRANK MARR:
"Swinson is one of the best dialogue hounds in the business."

"With ripped-from-the-headlines intensity....Swinson sustains the velocity of the drama and ingeniously gets at the power dynamic of personal relationships with nuance and generosity toward broken people in his messy world of ambiguous boundaries."—The National Book Review

"Within the first couple of pages, David Swinson pulls off a masterly piece of characterization: he creates a damaged, damned protagonist who no sane person would want to get close to, and then he grabs you by the collar and hauls you into Frank Marr's mind so fast and so thoroughly that none of that matters. The writing throws sparks, and the ferocious plot peels back layer after layer of Frank's character as we--and he--find out how much of his humanity is still left."—Tana French, author of The Trespasser

"Frank Marr prowls Washington like a creature from a different age: hard-knuckled, hard-drinking, equal parts loyalty, craving, determination, and regret. But in Trigger, David Swinson's detailed, glittering, vicious DC is up-to-the-minute. Never one to bend a rule when he can smash it instead, Marr leads us straight back into the wreckage he left in The Second Girl and Crime Song. It's a thrill to watch him pick up the pieces."—Bill Beverly, Edgar Award-winning author of Dodgers

"Frankie Marr, the ex-cop turned PI with a skewed sense of justice, situational ethics and a drug habit he kicked by turning to alcohol, is back. The ex-cop turned author, David Swinson, takes us on another pulse-pounding, stripped-down excursion into the badlands of the nation's capital. An old friend and colleague teeters on the brink of catastrophe and Frankie answers the call; his street wits, reckless courage, and pit bull tenacity racing ahead of glorious and soulful collapse. I missed you, Frankie, and I'm very happy to see you again."—Joe Ide, author of IQ

"Chock full of pace and purpose, Trigger lays out hard-hustle D.C. in all its gritty shades of gray without ever once sneering at them. It's a brave novel, one with no easy outs, and an ending that feels both raw and true."—Ryan Gattis, author of Safe

"Frank remains a fascinating, deeply flawed protagonist. . . . He remains a hard-boiled hero well worth our attention."—Booklist