The Best People: Trump's Cabinet and the Siege on Washington (Hardcover) 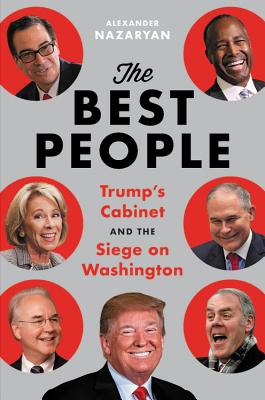 By Alexander Nazaryan
$28.00
Email or call for price.

An engrossing look at the Trump cabinet: the scandals, the incompetence, the assault on the federal government, the bungled attempts to impose order on an administration lost in a chaos of its own making.
Donald Trump promised a return to national greatness, but each day of his presidency seems to bring a new crisis, a deepening sense of national unease. Why, and how, has he failed his supporters? And how has he, on occasion, bested his detractors?

The Best People takes complete measure of the Trump administration, to grasp with clarity the president and his intentions, and how those intentions are being carried out-or subverted-by the people he has hired.

Alexander Nazaryan argues that the "assault on the administrative state" promised by Steve Bannon in early 2017 never came. What the American people got instead was Wilbur Ross hauling his tennis pro to confirmation hearing preparations; Scott Pruitt running away from rattlesnakes; Reince Priebus enduring insults from junior White House staffers.

And yet, bungling as Trump's cabinet members have been, they have managed to either damage or arrest many of the gears that make government run. They have given away public lands to oil companies and allowed corporate lobbyists to make decisions about what is best for the American people, and have done it all while flying on private jets and dining at the finest restaurants, at taxpayers' expense.

Meticulously reported and enthrallingly told, The Best People takes readers inside the federal government under Trump's control, a government assailed by the very people charged to lead it, a government awash in confusion and corruption.

Alexander Nazaryan is the Washington National Affairs correspondent for Yahoo. A former Newsweek staff writer, Nazaryan has written on politics, books and culture for the New York Times, Newsweek, the Washington Post, the Village Voice, the New Criterion, Salon, and many other publications.

"An essential exposé of the first two years of the Trump administration.... the first to fully capture just how dysfunctional - and destructive - Trump's executive branch has turned out to be."—The Washington Post

"Alexander Nazaryan offers a field guide to the black lagoon of Trumpworld."
—The Guardian

"[The] most authoritative look at the Trump cabinet, period."—AOL Build