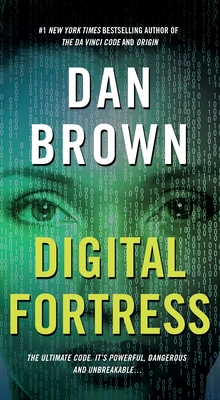 When the National Security Agency’s invincible code-breaking machine encounters a mysterious code it cannot break, the agency calls its head cryptographer, Susan Fletcher, a brilliant, beautiful mathematician. What she uncovers sends shock waves through the corridors of power. The NSA is being held hostage…not by guns or bombs but by a code so complex that if released would cripple U.S. intelligence.

Caught in an accelerating tempest of secrecy and lies, Fletcher battles to save the agency she believes in. Betrayed on all sides, she finds herself fighting not only for her country but for her life. It is a battle for survival—a crucial bid to destroy a creation of inconceivable genius that threatens to obliterate the balance of world power…for all time.

This edition of the book is the deluxe, tall rack mass market paperback.

Dan Brown is the author of numerous #1 bestselling novels, including Digital Fortress, Angels & Demons and The Da Vinci Code, which has sold more than 80 million copies worldwide, making it one of the best selling novels of all time. Named one of the World's 100 Most Influential People by TIME magazine, he has appeared in the pages of Newsweek, Forbes, People, GQ, The New Yorker, and others. His novels are published in 51 languages around the world. He is a graduate of Amherst College and Phillips Exeter Academy, where he spent time as an English teacher before turning his efforts fully to writing. He lives in New England with his wife.

“In this fast-paced, plausible tale, Brown blurs the line between good and evil enough to delight patriots and paranoids alike.” —Publishers Weekly

“Digital Fortress is the best and most realistic techno-thriller to reach the market in years... A chilling thrill a minute.” —The Midwest Book Review

“Digital Fortress is smart and reads with all the pace of a hit movie.” —Larry Lasker, Screenwriter, Wargames and Sneakers

"A disturbing, cutting-edge techno thriller that should galvanize everyone who sends or receives email or even dreams of navigating the Web."—John J. Nance, author of Pandora's Clock, The Last Hostage

"A master of the breathless, puzzle-driven thriller.”—Richmond Times-Dispatch

“What Brown does in a way that appeals to millions of people around the world is tell stories that remind us there’s more to the world than meets the eye.”—The Huffington Post

"Dan Brown is the master of the intellectual cliffhanger." —The Wall Street Journal