A Stranger in Mayfair: A Mystery (Charles Lenox Mysteries #4) (Paperback) 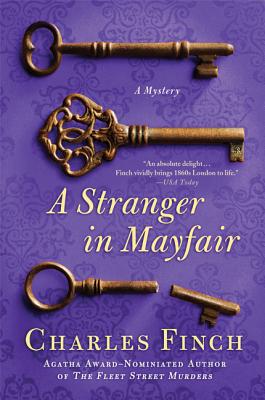 This is book number 4 in the Charles Lenox Mysteries series.

In Charles Finch's A Stranger in Mayfair, the next enthralling installment in the Charles Lenox Mysteries, detective Lenox tries to resist the lure of a case and focus on his new career in Parliament.

Returning from a continental honeymoon with his new wife, Lady Jane, Lenox is asked by a colleague in Parliament to consult in the murder of a footman, bludgeoned to death with a brick. His investigation uncovers some unsettling facts about the family he served and a strange, second identity that the footman himself cultivated.

Going into the boxing clubs and public houses, the Mayfair mansions and servants' quarters of Victorian London, Lenox gradually realizes that an old friend may be implicated in the footman's death. Soon a suspect is arrested, but Lenox has his doubts. Desperately trying to balance the opening of Parliament and what he feels sure is a dark secret surrounding the murder, he soon discovers that the killer is someone seemingly beyond suspicion, and may be prepared to spill blood again—even a detective's.

“Readers of Anne Perry should be snatching up Finch's books and clamoring for more.” —Library Journal (starred review)

“Perfect for fans of Lord Peter Wimsey.” —The Wichita Eagle

“The best sort of historical mystery--clever, charming, full of period detail, and a delight to read.” —David Liss, author of The Devil's Company, on A Beautiful Blue Death