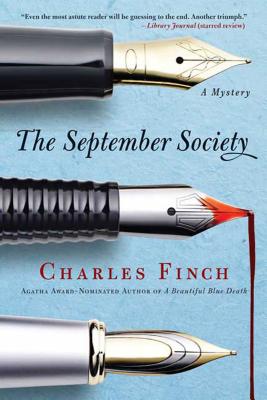 This is book number 2 in the Charles Lenox Mysteries series.

From the critically acclaimed author Charles Finch comes a novel "reminiscent of Ruth Rendell and Elizabeth George" (Booklist), in which Charles Lenox revisits his alma mater of Oxford to investiage one student's disappearance and another's murder--tied to a secret group known as The September Society.

In the small hours of the morning one fall day in 1866, a frantic widow visits detective Charles Lenox. Lady Annabelle's problem is simple: her beloved son, George, has vanished from his room at Oxford. When Lenox visits his alma mater to investigate he discovers a series of bizarre clues, including a murdered cat and a card cryptically referring to "The September Society." Then, just as Lenox realizes that the case may be deeper than it appears, a student dies, the victim of foul play.

What could the September Society have to do with it? What specter, returned from the past, is haunting gentle Oxford? Lenox, with the support of his devoted friends in London's upper crust, must race to discover the truth before it comes searching for him, and dangerously close to home.

“Even the most astute reader will be guessing to the end. Another triumph.” —Library Journal (starred review)

“An intriguing glimpse of student life at Oxford during the mid-Victorian era with a sleuth to rival Sherlock Holmes, only with more foibles and warmth than the original.” —Rhys Bowen, author of Tell Me, Pretty Maiden

“A fine specimen of the genre.” —The Washington Post on A Beautiful Blue Death

“The best sort of historical mystery--clever, charming, full of period detail, and a delight to read.” —David Liss, author of the New York Times bestselling The Whiskey Rebels