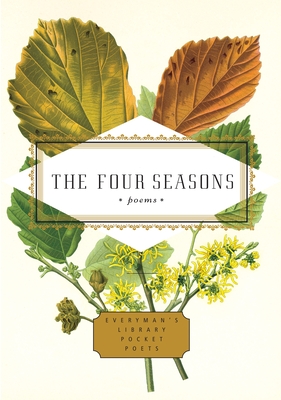 For the poet, even the most minute details of the natural world are starting points for flights of the imagination, and the pages of this collection celebrating the four seasons are brimming with an extraordinary range of observation and imagery.

Here are poets past and present, from Chaucer, Shakespeare, and Wordsworth to Whitman, Dickinson, and Thoreau, from Keats, Blake, and Hopkins to Elizabeth Bishop, Ted Hughes, Amy Clampitt, Mary Oliver, and W. S. Merwin. Here are poems that speak of the seasons as measures of earthly time or as states of mind or as the physical expressions of the ineffable. From Robert Frost’s tribute to the evanescence of spring in “Nothing Gold Can Stay” to Langston Hughes’s moody “Summer Night” in Harlem, from the “stopped woods” in Marie Ponsot’s “End of October” to the chilling “mind of winter” in Wallace Stevens’s “The Snow Man,” the poems in this volume engage vividly with the seasons and, through them, with the ways in which we understand and engage the world outside ourselves.

J. D. McClatchy is a poet and Professor of English at Yale University. He is a Fellow of the American Academy of Arts and Sciences and a member of the American Academy of Arts and Letters. His book Hazmat (Alfred A. Knopf, 2002) was nominated for the 2003 Pulitzer Prize. He edits the "Voice of the Poet" series for Random House AudioBooks; and has written texts for musical settings, including eight opera libretti, for such composers as William Schuman, Ned Rorem, Lorin Maazel, Bruce Saylor, Lowell Liebermann, and Elliot Goldenthal. His honors include an Award in Literature from the American Academy of Arts and Letters, and fellowships from the Guggenheim Foundation and the National Endowment for the Arts. He has also been one of the New York Public Literary Lions, and received the 2000 Connecticut Governor's Arts Award. He received the 1991 fellowship from the Academy of American Poets, and served as an Academy Chancellor from 1996 until 2003.  He has edited or co-edited four previous Everyman's Library Pocket Poet volumes.