Survive and Resist: The Definitive Guide to Dystopian Politics (Paperback) 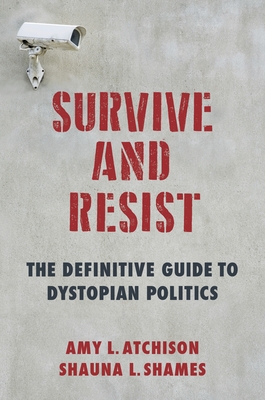 Authoritarianism is on the march--and so is dystopian fiction. In the brave new twenty-first century, young-adult series like The Hunger Games and Divergent have become blockbusters; after Donald Trump's election, two dystopian classics, 1984 and The Handmaid's Tale, skyrocketed to the New York Times best-seller list. This should come as no surprise: dystopian fiction has a lot to say about the perils of terrible government in real life. In Survive and Resist, Amy L. Atchison and Shauna L. Shames explore the ways in which dystopian narratives help explain how real-world politics work. They draw on classic and contemporary fiction, films, and TV shows--as well as their real-life counterparts--to offer funny and accessible explanations of key political concepts. Atchison and Shames demonstrate that dystopias both real and imagined help bring theories of governance, citizenship, and the state down to earth. They emphasize nonviolent resistance and change, exploring ways to challenge and overcome a dystopian-style government. Fictional examples, they argue, help give us the tools we need for individual survival and collective resistance. A clever look at the world through the lenses of pop culture, classic literature, and real-life events, Survive and Resist provides a timely and innovative approach to the fundamentals of politics for an era of creeping tyranny.

Amy L. Atchison is associate professor of political science at Valparaiso University. Her work has appeared in journals such as Politics and Gender, the Journal of Political Science Education, and PS: Political Science and Politics, among others. Shauna L. Shames is associate professor of political science at Rutgers University-Camden. She is the author of Out of the Running: Why Millennials Reject Political Careers and Why It Matters (2017) and coeditor of The Right Women: Republican Party Activists, Candidates, and Legislators (2018).