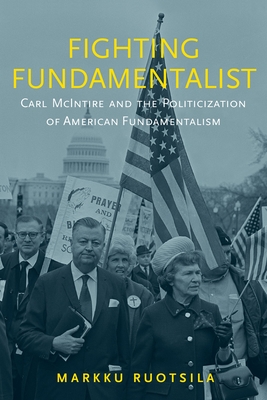 For most of his sixty-year career, the Reverend Carl McIntire was at the center of controversy. The best-known and most influential of the fundamentalist radio broadcasters and anticommunists of the Cold War era, his many enemies depicted him as a dangerous far rightist, a racist, or a
McCarthyite opportunist engaged in red-baiting for personal profit. Despised and hounded by liberals, revered by fundamentalists, and distrusted by the center, he became a lightning rod in the early days of America's culture wars. Markku Ruotsila's Fighting Fundamentalist, the first scholarly biography of McIntire, peels off the accumulated layers of caricature and makes a case for restoring McIntire to his place as one of the most consequential religious leaders in the twentieth-century United States. Ruotsila traces
McIntire's life from his early twentieth-century childhood in Oklahoma to his death in 2002. From his discipleship under J. Gresham Machen during the fundamentalist-modernist controversy, through his fifty-year pastorate in Collingswood, New Jersey, and his presidency of the International Council of
Christian Churches, McIntire, Ruotsila shows, stands out as the most important fundamentalist of his time. Drawing on exhaustive research in fifty-two archival collections-including the recently opened collection of the Carl McIntire papers and never-before-seen FBI files-Ruotsila looks beyond the
McIntire of legend to discover a serious theological, political, and economic combatant, a tireless organizer who pioneered the public theologies, inter-faith alliances, and political methods that would give birth to the Christian Right. The moral values agenda of the 1970s and after would not have existed, Ruotsila shows, without the anti-communist and anti-New Deal activism that McIntire inaugurated. Indeed, twentieth-century American religious and political history were profoundly shaped by forces McIntire set in motion. Fighting
Fundamentalist tells the overlooked story of McIntire and the movement he inspired.

Markku Ruotsila (Ph.D., Cambridge) teaches American church history at the University of Helsinki in Finland. He has written widely on twentieth-century evangelicalism, fundamentalism, and anticommunism and has worked as visiting Fellow at the Rothermere American Institute, University of Oxford, andas a visiting scholar at New York University and the Hoover Institution at Stanford University. The author of six previous books, including The Origins of Christian Anti-Internationalism: Conservative Evangelicals and the League of Nations (2008), his articles have appeared in Church History, theJournal of Ecclesiastical History, the Journal of American Studies, and elsewhere.