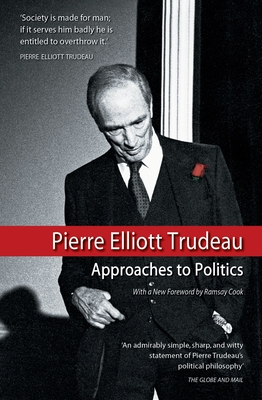 Society is made for man; if it serves him badly he is entitled to overthrow it -Pierre Elliott Trudeau No man played a more prominent role in modern Canadian political life than Pierre Elliott Trudeau. He was loved, he was hated, but most of all, he mattered. Trudeau burst like a comet onto the federal political scene, becoming Canada's fifteenth prime minister in 1968. But as this collection of essays from the 1950s clearly shows, Trudeau had thought long and hard about the fundamental principles of government and politics before gaining the national spotlight. Approaches to Politics is an essential introduction both to the political philosophy of Pierre Trudeau and to the eternal principles underlying democracy-a book as relevant and readable today as when it was first published four decades ago. This edition includes a new foreword by noted historian Ramsay Cook, as well as Cook's original introductory essay and a prefatory note by Jacques Hebert.

Pierre Elliott Trudeau (1919-2000) was elected the fifteenth prime minister of Canada in 1968, remaining in office until 1979 and serving a final term from 1980 to 1984. Intellectual, charismatic, flamboyant, he is one of the seminal figures of twentieth-century Canadian political life. Before gaining the national spotlight, he was a widely published essayist and critic of Quebec's Duplessis government. Ramsay Cook, Professor Emeritus of York University in Canada, is one of Canada's most highly regarded historians. He contributed the original introductory essay to Approaches to Politics as well as a new foreword written especially for this edition.