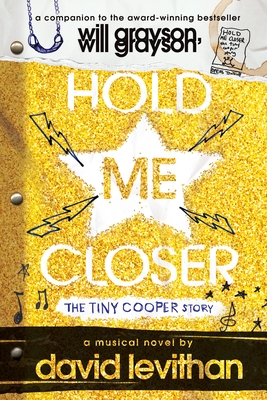 It’s Tiny Cooper’s turn in the spotlight in this companion novel to New York Times bestseller Will Grayson, Will Grayson.

Jazz hands at the ready! Tiny Cooper (“the world’s largest person who is also really, really gay”) stole readers’ hearts when he was introduced to the world in the New York Times bestselling book Will Grayson, Will Grayson, co-authored by John Green and David Levithan. Now Tiny finally gets to tell his story—from his fabulous birth and childhood to his quest for true love and his infamous parade of ex-boyfriends—the way he always intended: as a musical! Filled with honesty, humor, and “big, lively, belty” musical numbers, the novel is told through the full script of the musical first introduced in Will Grayson, Will Grayson.

David Levithan is the New York Times bestselling author of many novels for young readers including Every Day, Will Grayson, Will Grayson (with John Green), and Nick and Norah’s Infinite Playlist (with Rachel Cohn), which was turned into a feature film. His recent novel, Two Boys Kissing, won the Lambda Literary Award in the children’s/YA category. He’s a publisher and editorial director at Scholastic Press. David also teaches at The New School in their MFA program. He lives in Hoboken, New Jersey.

“Tiny will have readers falling out of their chairs laughing. . . . It's big. It's gay. It's outrageous and hilarious.” —Kirkus Reviews

★"Levithan has turned in another star turn with a book that is witty, wise, and well worthy of an encore." —Booklist, starred review

"[Hold Me Closer] is able to stand on its own as a story of coming out, looking (and looking and looking) for love, and valuing and trusting one’s friends." —Horn Book

“Will Grayson, Will Grayson is a complete romp. [It is] so funny, rude and original that by the time flowers hit the stage, even the musical-averse will cheer.” —The New York Times Book Review

“[It] will have readers simultaneously laughing, crying and singing at the top of their lungs.” —Kirkus Reviews, starred review

“It is such a good book. [Green and Levithan] are two of the best writers writing today.” —NPR’s The Roundtable

“This novel has serious buzz.” —EntertainmentWeekly.com

“One of the best books of the year.” —Bookpage