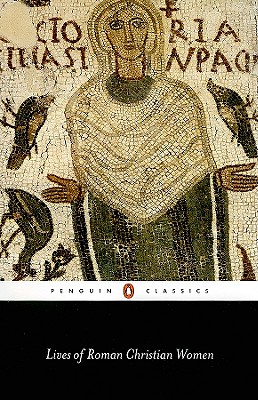 'Perpetua shouted out with joy as the sword pierced her, for she wanted to taste some of the pain and she even guided the hesitant hand of the trainee gladiator towards her own throat'

Lives of Roman Christian Women is a unique collection of letters and documents from the third to the fifth centuries, celebrating Christian women from across the Roman Empire. During a crucial period in which Christianity transformed from a persecuted faith to the official religion of the Empire, these writings reveal the women who chose to dedicate their lives to Christ, by embracing martyrdom or by adopting a life of poverty and prayer, renouncing not only wealth but also their duties as wives and mothers.

For more than seventy years, Penguin has been the leading publisher of classic literature in the English-speaking world. With more than 1,700 titles, Penguin Classics represents a global bookshelf of the best works throughout history and across genres and disciplines. Readers trust the series to provide authoritative texts enhanced by introductions and notes by distinguished scholars and contemporary authors, as well as up-to-date translations by award-winning translators.

Carolinne White was born in London and read Classics and Modern Languages at St. Hugh's College, Oxford. She wrote a doctoral thesis on Christian ideas of friendship in the fourth century,published in 1992. After two years spent teaching Latin at the University of South Africa in Pretoria, she returned to Oxford where she worked on the supplement to the Liddell and Scott Greek Lexicon and taught Patristic and Medieval Latin. She now divides her time between work as an assistant editor on the Dictionary of Medieval Latin from British Sources, translation work and her four children. Her publications include a translation of the correspondence between Jerome and Augustine (1990), Early Christian Lives (Penguin, 1998), an anthology of Early Christian Latin Poets in translation (2000) and The Rule of Benedict (Penguin, 2008).