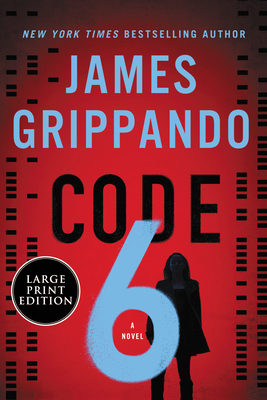 Harper Lee Prize winner and New York Times bestselling author James Grippando returns with a bold new thriller that asks at what price do we open our lives to Big Data.

Aspiring playwright, Kate Gamble, is struggling to launch a script she’s been secretly researching her entire life, mostly at the family dinner table. Her father is Christian Gamble, CEO of Buck Technologies, a private data integration company whose clients include the CIA and virtually every counter-terrorism organization in the Western World. Kate’s father adores her, and a play about the dark side of Big Data would be the ultimate betrayal in his eyes. But Kate is compelled to tell this story—not only as an artist exploring the personal information catastrophe that affects us all, but as a daughter trying to understand her mother’s apparent loss of purpose, made even more disturbing by the suicide note she left behind: I did it for Kate.

Then Patrick Battle comes back into her life, changing everything she has ever thought about her play, her father, and her mother’s tragic death. Patrick is a childhood friend, but he is now Buck’s golden boy with security clearance to the company’s most sensitive projects. When Buck comes under investigation by the Justice Department and Patrick suddenly goes missing, Kate doesn’t know who to trust. A phone call confirms her worst nightmare: Patrick has been kidnapped, and the ransom demand is “Code 6”—the most secret and potentially dangerous technology her father’s company has ever developed.

Kate’s fight to bring Patrick home safely reveals a conspiracy and cover up that may implicate one of the most powerful executives in the tech industry, while the development of Kate’s play unleashes family secrets and the demons behind her mother’s cryptic final note. The two paths converge in explosive fashion, leading to a shocking and terrifying discovery that puts Kate and Patrick in the crosshairs of forces who will stop at nothing to control Code 6.

James Grippando is a New York Times bestselling author with more than twenty books to his credit, including those in his acclaimed series featuring Miami criminal defense attorney Jack Swyteck. Grippando was a trial lawyer for twelve years before the publication of his first novel in 1994. He lives in South Florida with his wife, three children, two cats, and a golden retriever named Max, who has no idea he's a dog.

“Chilling . . . Grippando leads Twenty through a complex plot that maintains its sense of realism until the surprising finale.” — South Florida Sun Sentinel on Twenty

"There’s a reason that James Grippando is a New York Times bestselling author and the recipient of the Harper Lee Prize for Legal Fiction. . . . Twenty certainly works well as a stand-alone title, but it also will inspire readers to delve into Grippando’s backlist, so be prepared." — Book Reporter on Twenty

"What begins as a thriller and then moves into a legal novel, devolves into a full-blown espionage story that calls to mind the work of Brad Thor, among others . . . When the significance of the number twenty is finally revealed it will send chills down your spine and you will soon realize that this is unlike any other Jack Swyteck novel to date." — CriminalElement.com on Twenty

“Twenty is an excellent legal thriller by an experienced hand at storytelling . . . It’s still only January, but it looks as though James Grippando may have offered us one of the best thrillers of 2021.” — New York Journal of Books on Twenty

“James Grippando's taut and briskly paced story grips the reader from the opening chapter and then keeps them close as Jack Swyteck and his associates race to uncover the forces bent on keeping the truth of the tragedy hidden. Twenty is a highly addictive novel and it is impossible to put down." — Mystery Scene on Twenty

“Grippando masterfully weaves the various plot threads together, revealing unexpected connections … this is an ambitious thriller that asks the reader to follow a complex story and delivers a deeply satisfying conclusion. Grippando’s biggest strength has always been his ability to create characters who feel as real as people we might meet on the street ... CODE 6 features some of Grippando's most compelling characters and one of his most intriguing stories.”  — Booklist

James Grippando . . . proves why he is one of the best thriller writers out there with the release of his latest stand-alone novel, CODE 6. . . . What really drives this book are the characters --- fully fleshed-out, real and complex --- and you cannot help but root for Kate every step of the way right up until the stunning conclusion. — Bookreporter.com