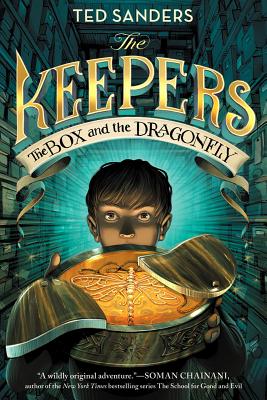 By Ted Sanders, Iacopo Bruno (Illustrator)
$7.99
On Our Shelves Now

This is book number 1 in the Keepers series.

U of I fiction professor’s series of Harry Potter-like fantasy but set in the 2010s in Chicago. Amazing balance of femme and male energy unlike Harry Potter.

Experience the fantastic adventure filled with magical objects, secret sects, and life as we know it on the line! Mixing magic and physics, Ted Sanders has created an epic story that has the feel of classic fantasy but twists it into something new and innovative.

From the moment Horace F. Andrews sees the sign from the bus—a sign with his own name on it—everything changes. The sighting leads him underground, to the House of Answers, a hidden warehouse full of mysterious objects. But there, he finds only questions. What is this curious place? Who are the strange, secretive people who entrust him with a rare and immensely powerful gift? And what is he to do with it?

When Horace finds the Box of Promises in the curio shop, he quickly discovers that ordinary-looking objects can hold extraordinary power. From the enormous, sinister man shadowing him to the gradual mastery of his newfound abilities to his encounters with Chloe—a girl who has an astonishing talent of her own—Horace follows a path that puts the pair in the middle of a centuries-old conflict between two warring factions in which every decision they make could have disastrous consequences.

Ted Sanders is the author of the short-story collection No Animals We Could Name, winner of the 2011 Bakeless Prize for fiction. His stories and essays have appeared in publications such as the Georgia Review, the Gettysburg Review, and The PEN/O. Henry Prize Stories anthology. A recipient of a 2012 National Endowment for the Arts Literature Fellowship, he lives with his family in Urbana, Illinois, and teaches at the University of Illinois at Urbana-Champaign. The Keepers is his first series for younger readers. You can visit him online at www.tedsanders.net.

Iacopo Bruno is a graphic designer and illustrator. He is also the illustrator of the acclaimed books Mesmerized: How Ben Franklin Solved a Mystery that Baffled All of France and Anything But Ordinary Addie, both by Mara Rockliff. He lives and works in Milan, Italy, with his wife, Francesca. Learn more about Iacopo at www.theworldofdot.com and www.iacopobruno.blogspot.it.

“An epic adventure of self-discovery, magic, tragedy and blurred lines of loyalty for middle-grade lovers of fantasy.”
— Kirkus Reviews

“The magical world is full of detail and wonder. Fans of Harry Potter and Gregor the Overlander will find this one entertaining.”
— School Library Journal

“Sanders uses mystery, action, and suspense to intrigue readers. A rousing start for the Keepers series.”
— ALA Booklist

“Ted Sanders combines elements of the best classic fantasy adventures with ingenious twists that are all his own.”
— Caroline Carlson, author of The Very Nearly Honorable League of Pirates series

“The Keepers is a wildly original adventure, electric-paced and brain-bending, that will enthrall kids and adults alike. It’s more than a fantasy, building physics and folklore into its search to answer questions about whether true magic can ever exist.”
— Soman Chainani, author of the New York Times bestselling series The School for Good and Evil