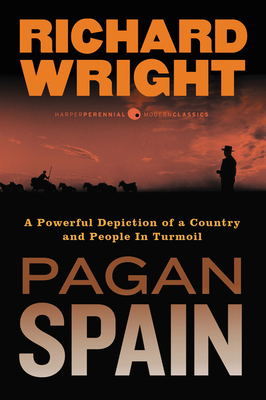 A master chronicler of the African-American experience, Richard Wright brilliantly expanded his literary horizons with Pagan Spain, originally published in 1957. An amalgam of expert travel reportage, dramatic monologue, and arresting sociological critique, Pagan Spain serves as a pointed and still-relevant commentary on the grave human dangers of oppression and governmental corruption.

The Spain Richard Wright visited in the mid-twentieth century was not the romantic locale of song and story, but a place of tragic beauty and dangerous contradictions. The portrait he offers in Pagan Spain is a blistering, powerful, yet scrupulously honest depiction of a land and people in turmoil, caught in the strangling dual grip of cruel dictatorship and what Wright saw as an undercurrent of primitive faith.

Richard Wright won international renown for his powerful and visceral depiction of the black experience. He stands today alongside such African-American luminaries as Zora Neale Hurston, James Baldwin, and Toni Morrison, and two of his novels, Native Son and Black Boy, are required reading in high schools and colleges across the nation. He died in 1960.

"This is Richard Wright's Spain, which means that it is fascinating, intense, subjective, emotional."
— New York Times Book Review

"Controversial in the extreme, but [the author] presents a point of view with honesty."
— San Francisco Chronicle