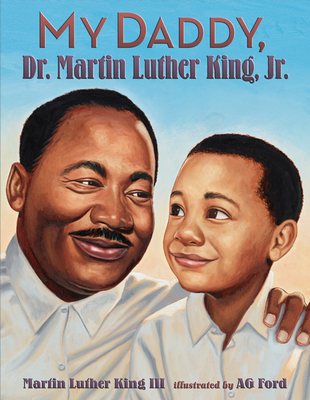 “I have a dream that my four little children will one day live in a nation where they will not be judged by the color of their skin but by the content of their character.”

Martin Luther King III was one of those four little children mentioned in Martin Luther King’s groundbreaking “I Have a Dream” speech. In this memoir, Martin Luther King Jr.’s son gives an intimate look at the man and the father behind the civil rights leader. Mr. King’s remembrances show both his warm, loving family and a momentous time in American history.

AG Ford is the illustrator of several other books for children, including the New York Times bestselling Barack. He is the recipient of an NAACP Image Award.

Martin Luther King IIIis the elder son of civil rights leader Dr. Martin Luther King, Jr., and Coretta Scott King. He is a human rights advocate and community activist. He lives in Atlanta, Georgia, with his wife, Arndrea, and his daughter, Yolanda Renee.

AG Ford is the illustrator of the New York Times bestselling Barack by Jonah Winter and also of Michelle and First Family by Deborah Hopkinson. He is the recipient of an NAACP Image Award.